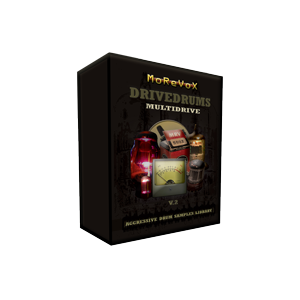 Distortion is at the center of an exciting sound.

MoReVoX DRIVEDRUMS has been developed by generating distortion through different kind of devices. Vacuum Tubes, Analog Tapes, Preamps have been used to create samples with light to aggressive and violent distortion. MoReVoX DRIVEDRUMS contains RICH and FAT natural acoustic sounds ideal for every kind of music. All samples have been tested on mixes and optimized for retrigghering and stand alone use.

The MoReVoX DRIVEDRUMS’s Samples have been divided into two categories : Drive Samples and Over Samples.

The Drive Samples have been developed starting from the classic hardware harmonic distortion , so all the samples contain a smoother distortion character (Tape compression warmth, subtle valve saturation).

The Over Samples instead are based on distortion; the samples have been developed finding their character in conjunction with the hardware distortion (Valve/Console Preamps, Analog Tape Saturation, Heavy Valve Compression, Dedicated distortion boxes, plus a large selection of TDM plugins).

With Drivedrums v2 MoReVoX introduces Multidrive. Taking advantage of the new Room Sounds feature in Drumagog 5, Drivedrums v2 uniquely substitutes the room sounds for three controlled distortion 'colours' through the plugin mixer. It works similarly to an equalizer, but these tone variations were created by splitting the original drum sounds into different frequency bands and then building brand new samples. These new variations were then carefully processed through a variety of distortions, using top-quality analog signal chains, with the aim of providing different distortion colours components that can be mixed with the base samples.

In each GOG file you have three macro tone controls:

This is not a modelled EQ emulation but an outstanding sound generator based on REAL professional gear's dynamic behaviour. Multidrive is not only a fast and easy way to intensely change a drum's tonal balance, but also an incredible tool to generate thousands of new sounds.