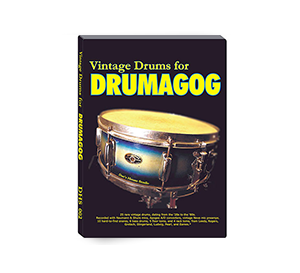 The Dan's House Vintage Drums collection features 10 classic snare drums, 4 rack toms, 5 floor toms, and 6 bass drums. The samples were recorded with top-shelf gear and carefully mixed to give you all the detail and impact we heard live in the studio the day we recorded them.

We've got drums from Gretsch, Rogers, Slingerland, Radio King, Pearl, Yamaha, Leedy, Ludwig and Eames, dating from the '20s through the '80s, including a full 1967 Ludwig Club Date kit.

We used vintage Neve 1272 preamps and an Apogee PSX 100 analog-to-digital converter in the signal chain, so the GOG files are true-to-life samples of these great-sounding, hard to find drums!

Although these drums are collector's items, they don't spend their lives on the shelf. They're actively used at gigs and in the studio. (The '67 Ludwig kit was just used for tracking some of Paul Simon's stuff in 2003.) These are working instruments!

Each snare is represented on the collection with a total of 138 samples, covering a wide of range of sounds, from tight and muted to open and ringy, whisper quiet to hard rim shots, crossticks to brushes, and more.

No processing was used on the samples - no eq, reverb, compression, or gating. What you hear is just the sound of the drum recorded with great gear, allowed to decay fully and naturally.

Each drum sample was recorded with a dynamic mike at a distance of a few inches, a large diaphragm condenser mike at a distance of a few feet, and a pair of large diaphragm condenser mikes about 8' from the drum, and 10' apart to capture a stereo image. The two close-mike tracks were carefully phase-corrected, but the stereo track was left with a natural delay of about 3 ms to give a slight ambience.

The three sources were then balanced and mixed down to create the stereo samples in the collection. No processing was added in the signal chain.

Nuendo 2.01
The two close mikes were run through Neve 1272 preamps and an Apogee PSX100 AD converter, and the two room mikes went through FMR Audio's RNC preamps, and a MOTU 2408 AD converter.

Snares The snares have the most extensive sampling with a total of 138 samples for each drum! The samples are arranged in Drumagog's GOG file format as follows...

Each snare has two full 48-sample gog files, the first featuring the sound of the snare somewhat muted, the second with the drum wide open. There are five velocity levels for each, from a whisper to a loud crack.

Within each GOG file, you have the option of choosing a hit on center or off-center using Drumagog's positional feature. The on-center hits have five instances for each velocity level, and the hits off-center have either four or five instances for each level. (We would have used 5 instances of each of the 5 velocities, but that adds up to 50 samples - had to cut two in order to fit Drumagog's limit of 48 samples per GOG!)

This means that for each drum you go from a nice tight sound by dialing up a muted drum with a stick on-center, or go to the opposite end of the spectrum for a wilder, ringier tone by choosing an unmuted drum hit off-center.

Each snare has it's own unique character - some are full and meaty, some ringy and brittle, some crisp, and some with lots of loose tone.