Imagine creating an entire song with only your voice. 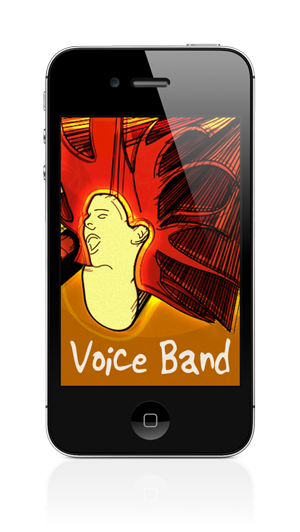 Just sing into your phone and hear Voice Band transform your voice into an instrument in real time. Voice Band doesn't simply alter your voice to sound like an instrument, it actually plays a real sampled instrument which follows what you sing. Want to jam to a guitar solo with your favorite band? Voice Band lets you play along with your iPod library, too.

Whether you’re a musician looking to instantly capture an arrangement idea, or a music fan looking to make your own music for the first time, Voice Band will inspire and challenge you.

Voice Band features a recorder which lets you build a song, one instrument at a time. Auto pitch mode helps you stay on key, and if you're a musician, you'll appreciate the adjustable scale and metronome. Voice Band also includes a built-in effects processor with distortion, reverb, and delay.

NOTE: A pair of headphones (with a built-in mic) is required for iPod Touch and original iPhone users.

Demonstrating the basics of Voice Band

If you notice your screen turning off while using Voice Band, it's most likely because you moved a finger in front of the your phone's proximity sensor. Voice Band uses the proximity sensor to turn off the screen when you place the phone to your ear. This prevents your face from pressing buttons. The proximity sensor is located above the top left corner of the screen. NOTE: This only applies to iPhone 3G and 3GS devices.

Voice Band and Your Voice

Voice Band is designed to work with most voices, however vocal characteristics vary greatly from person to person. If you're having a hard time getting Voice Band to track your voice properly, try singing pure tones (avoid making your voice sound "raspy"). Also, the best range to sing is your high range.

NOTE: Avoid using Voice Band when you have a cold. When you're congested, your voice changes in a way that makes it very difficult for Voice Band to detect pitch.

When using the "Mic" instrument, we found it easy to overload the iPhone's built in microphone. To minimize this distortion, sing directly into the screen of your phone, instead of into the microphone.

Voice Band includes a recorder which lets you build an entire song, one instrument at a time. To use the recorder, please follow these steps:

You can choose the "Mic" instrument to record your own voice along with the music you've created.

When you're done, you can save your song, or email it to a friend using the email button.

If you'd like to listen to the song you've created though the iphone's speakers, press the "Speaker" button. In this mode, audio will come out of the iPhone's speaker whenever you press Play.

The drum instruments are unique, because they contain more than one type of sound. For example, the "Kick/Snare" instrument contains both a kick drum and a snare drum. Voice Band will play the kick drum when you sing a quiet note, and a snare drum when you sing a louder note. Likewise, the hi-hat instrument will play a closed hi-hat sound on softer notes, and an open sound on louder notes. Pitch is ignored when using the drum instruments.

There's a control in the settings page called "Drum Threshold" which adjusts the trigger point between the kick and snare (or open/closed hi-hat). Use this control to fine tune how Voice Band switches between these two instruments.

If you're having trouble getting the drums to play consistently, you may want to play each drum individually. To do this, move the drum threshold control all the way to one side (for example the side labeled "Kick"). This will cause Voice Band to only play that one instrument.

It may require some practice to play the drums with your voice accurately. Here are some tips: